4.3.47 not showing graphs after scan or preview before scan (repost)

Previously deleted it because I got the gizmos working when I downgraded to 4.2.7 and thought I just had to reinstall, but uninstalling 4.2.7 and again reinstalling 4.3.47 once again disabled the gizmos. Reposting because I believe there is a bug with 4.3.47 that messes with the pre and post-scan gizmos.

Going to downgrade back to 4.2.7 again for now, even though I really appreciate the fixes and improvements of later versions :-/

When will the stable version will be updated to include those later improvements?

Do you use a render pipeline or some other non-default rendering settings? And if so, do you use any post-processing effects of some kind?

Also when I update to 4.3.47, it tells me my burst compiler has been updated to a newer version and to restart my editor. It then seems like compiling takes longer, which makes me feel like the latest burst compiler has issues. Not sure how that could affect 4.3.47 from displaying the gizmos, but thought I’d at least mention it

Did you end up figuring it out?

I have not been able to replicate this I’m afraid

That’s a bummer. I’ll check it some more once I clear my other tasks. Do you recall what changed fixed the RichAI reachedEndOfPath? Without being able to work the later version of A*, I’m stuck with the broken reachedEndOfPath. In one of the logs, I read something about it not working properly if the destination y-coordinate was non-zero?

Just reinstalled 4.3.47. The issue is still there, however it looks like it only exists in the editor. In playmode I can see the graph just fine. I hope that can help you narrow the root of the issue.

Edit: In playmode, the graph was visible, but only on two primitive cubes (odd…) as you can see in the first picture below. However when scanning at runtime, the graph generated perfectly fine (see picture 2). What could be causing the graph generation and gizmo display to bug in the editor? (it must be some changed made after the pro version). 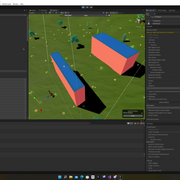 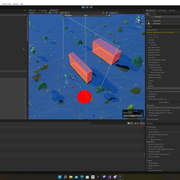 EDIT2: Generating a cache at runtime does save the cache file and loading the cache while I’m in play mode does restore the graph, but loading it in the editor does not spawn the graph nor gizmos. Nor does setting it in “cache startup” load the graph at runtime.

EDIT3: Hacked it to work by using:
AstarPath.active.data.LoadFromCache();

on Start. However, I’m disappointed by having to use this hack, and I still don’t get the working graph gizmos/generation in the editor, which was invaluable.